Thirst. My call for sustainability.

In the last thirty days I have driven a total of 3,894 miles.

These adventures were definitely not of the greenest variety, being that they were all driving - in my 10-year-old SUV - by myself (although, in my defense, I did make a game out of seeing how many miles I could squeeze out of each tank of gas. Straight coastin’…)

That disappointing fact aside, I cannot express how completely and utterly amazing the experiences have been.  I have developed an extreme appreciation for my surroundings, and I attribute that to the time I have spent in Colorado.  When asked what it is about Colorado that I love so much, I often explain how Coloradoans simply seem to enjoy life and what is around them.  When the sun is out in Colorado, you are out in Colorado. If you’re stuck inside for any reason, you’re counting the minutes until you can get outside to enjoy the outdoors and the sunshine.  Despite my love for the environment, it wasn’t until this past year that I developed such an extreme thirst for the outdoors.

This thirst has since opened my eyes to the beauty surrounding me.  I began to notice this “awakening” while still in CO, splitting my time between city life in Denver and mountain life in Conifer, and it really hit me during the first couple of hundred miles in the initial trek from Colorado back home to Glendora, California. Everything was gorgeous- the mountains, the trees, the rock walls, the sand, the rivers, the tunnels, the way the road curved.  No foot of scenery was the same; each move forward caught new light, shifted direction, changed in some subtle way that created something brand new and beautiful- none of which could be properly recorded on camera.

The feelings of amazement and recognition of beauty did not stop once we hit the Colorado plains, nor did it dissipate in the miles and miles of Utah, the small stint in Arizona, the pull through Nevada, or the home stretch through California (although, I will admit that Nevada did give them a run for their money).  Throughout the 16 hours traveling west from Denver, I realized first-hand just how diverse the United States of America are.  There are so many different landscapes, biomes, ecosystems, vistas…  If I felt this way driving across the varying, but comparatively homogeneous, route of I-70W and I-15S, what was to come from my trips later that month?

Needless to say, I was excited to drive to Louisiana.  I was even more excited because I had four days to do it- plenty of time to allow for off the path meanderings and exploration.  Leaving Glendora, driving along the highways (or I guess in this case, freeways) that I’ve seen countless times, I felt like I was seeing everything through different eyes.  It was as if a dulling lens had been removed from my vision; everything I was looking at was so much more clear and vibrant.

Maybe it was that I was actually looking around me, as opposed to just driving by like I had done for the past 23 years.  The San Gabriel Mountains were gorgeous.  The windmills on the way to Palm Desert were awe-some.  Arizona was not just desert.  Cacti are amazing - no two alike - and you could actually see where the vegetation switched from supporting an abundance of cacti to loads of yucca plants (which also grow along the highways in Los Angeles, I might add).  Arizona is where I witnessed my first sunset - it was beautiful.  As beautiful and orange and purple as the sunset was, the sunrise early the next morning coming out of Benson, AZ was even more amazing.  The rising and setting of the sun was definitely something that I had never appreciated before, a fact that I am now extremely embarrassed to admit.

Then I reached New Mexico.

I don’t think there are enough words in the English language to describe all of the feelings I encountered during the journey across New Mexico. I could almost go on forever, literally.  Let’s just put it this way: The question, or catch phrase, or however you want to put it: “Who knew?!?!!” concisely sums up my New Mexican experience.  It was here that I ventured off the mapped route and headed towards White Sands National Monument and Carlsbad Caverns- two remarkable places connected by a highway that weaves through the Lincoln National Forest.  It is here in this Forest, which I had no prior knowledge of existing, that the entirety of my appreciation reached its peak.  (Do not let the term “peak” fool you though, there has yet to be any sign of decline after that point.)

This is not supposed to be a chronicle of my cross-country experience though, so I will have to give Texas the short end of the stick… I enjoyed my 30 or so hours there very much though!  I would, however, like to quickly add that it was in Beaumont, TX (where gas was only $3.19) that I was slapped in the face by humidity.  I was shocked how at one time when I was out of the car it was hot and desert-y and the next it was still hot, but disgustingly sticky.  The shift had to have happened somewhere before Beaumont when surroundings all of a sudden became incredibly green, and progressively greener the further east I got.

Louisiana, at least southern Louisiana, should definitely be deemed something along the lines of “The Bridge State”.  Driving over, literally over, all of the water reminded me how much we have changed the natural environment to suit ourselves.  If it weren’t for the bridge, it would be a lot more difficult to inhabit this area, but someone found a way to fix that… 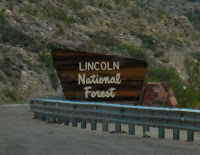 Anyway, the reason why I began writing in the first place was to mention how shocked I was at the number of signs denoting national forests, state parks, conservation areas, etc.  The brown ones with white writing, often times in shapes other than a typical rectangle.  I did not know (or expect) that many of these preservation areas existed.  I have to say that I am impressed with the work that the country has done to protect good portions of its land.  Granted, there is always more that can be done.  California, in particular, has a few areas that are in desperate need of conservation and restoration- but throughout the Southern U.S. there seems to be quite a bit of preservation.  These areas provide an amazing opportunity for the enjoyment of the different beauties that our lands have to offer.

Thank you to this drive across the United States.  Thank you to California, Arizona, New Mexico, Texas, and Louisiana.

I remember why I am doing what I am doing.  I remember why I am so passionate about the environment and sustainability.  I wouldn’t say that I ever lost the drive to work to protect the environment, but this experience acted as a great “recharge”.  We have lands set aside and protected from development (the national monuments, state parks, etc.), and it would be great to add more, but there is a simpler way. We can stop developing on the vast open areas that are still left, but not under any official protection (i.e. the stretch between Denver and the airport, or any of the expanses of land along, and beyond, Interstate 10).

We need to learn to live with what we have.  It is time to go back to coexisting with the environment, as opposed to conquering it.  Conquest only leads to problems in the long run.  Dominating the coast of Louisiana has led to the deterioration of acres upon acres of wetlands, seriously hindering a natural source of storm protection.  We experience a similar catastrophe in Southern California every year when wildfires run rampant almost each fall.  This area, like many others before development, was actually a fire-dependent ecosystem.  Instead, we have controlled and prevented fires from occurring naturally, leading to the accumulation of characteristics that encourage the development of wildfires that are detrimental to both people and the environment.

Everything I have seen in the past 30+ days, nature and city based, has reiterated where our greatest need for improvement is.  Sustainability needs to become an aspect of everyday life.  Environmentally conscious decisions should be subconscious decisions.  The way we live our lives needs to take in to account both the beauty of our surroundings and the need to preserve that beauty.  This is not hard.  We have simply come to confuse the definitions of want and need.  We think we need so much more than we do, therefore taking too much from the earth and risking its life in turn.  Things can only get better if we begin to live sustainable lives and if the corporations that surround us commit to doing the same.