Go to greeningthemlb.tumblr.com for more pieces of the Angel Stadium sustainability report and other green sports postings. 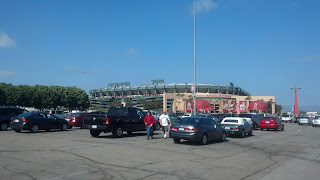 A sea of asphalt.  Other than the trees lining the main entryway, Angel Stadium is set in the middle of parking, parking, and more parking.  The massive paved lot has little-to-no greenery, no storm water management bmps, and only costs $10 to park in.  Not only does this sea of impermeable surface contribute massive amounts of storm water run off, but its price is set at a rate that practically encourages people to take vehicles to the game.

Yes, there is an amtrak station and bus stop nearby the stadium, but green commuters must then cross the expansive parking lot before finally making it to the stadium gates.  And since it's only $10 dollars to bring a car, why not just drive and have the convenience of a personal vehicle?

I would improve the current parking lot situation at Angel Stadium by putting in native plant installations throughout the lot, or at least around the outside-- with the cumulative infiltration capacity equal to the average amount of storm water runoff that area sees each year.  Also, I would raise parking prices to deter people from arriving to the game by car and make the walk from public transit drop off to the stadium gates far more enjoyable. 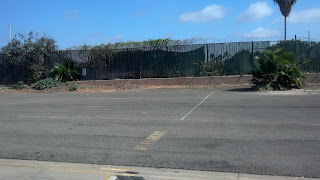 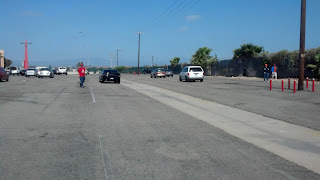