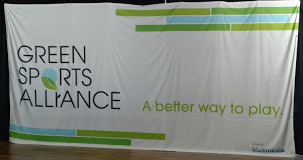 Sustainability practices are flooding the sports world like waves of fans tearing down the goalposts after winning a Super Bowl. Except this revolution is not televised and few fans know of the many sustainability wins inside major sports programs worldwide.

Is sport just about wins and losses on the field?  Off the field, the history of sport is deeply embedded in the history of social change. Jackie Robinson. Muhammad Ali. Billie Jean King. Magic Johnson. Kaitlyn Jenner. For better or worse, sport entertains, models life’s successes and failures, inspires excellence, and influences us all.  So, how to leverage this incredible influence and  spark sustainability through sports?

To find out, I ventured to steamy Houston, Texas for the 6th annual Green Sports Alliance Summit, my fourth year attending this meeting of the sports and sustainability minds.  The Green Sports Alliance (GSA) was formed in 2009 to initiate a movement to leverage the influence of sport to create and promote healthy, sustainable communities.  In just seven years, the GSA has grown to include almost 400 member teams, leagues, and venues. Their facilitation and thought leadership have inspired significant environmental improvements by way of energy efficiency and renewables, water use, and waste diversion.

So what’s happening in green sports? A lot, actually.  Whether it’s a battle between Pac-12 schools for the highest diversion rate or a team implementing the first of its sustainability programs, recycling and/or zero-waste programs are a pinnacle green sports initiative.  Energy efficiency improvements have always been the ringer for cost savings.  This year, LED field lighting and their affect on the playing surface and broadcasts earned a significant amount of discussion time. From local sourcing, on-site gardens, health implications, and donations, food is a multi-faceted topic with a multitude of opportunities for teams to make sustainable improvements.  Newer to the scene is the presence of “green” sponsorship, unique opportunities for team-company partnerships meant to leverage and promote an aspect of sustainability as well as the sponsoring brand. 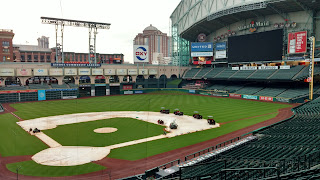 And why are the [insert your home team here] doing this, again?  The GSA and Sports Business Journal surveyed its members to gather insight on the state of the state of the green sports movement.  Among intriguing numbers about the adoption of practices like those outlined above, most respondents indicate “the right thing to do” and “a cost saving measure” as motivation to pursue sustainability initiatives. Motivation aside, teams hope to realize benefits related to “good stewardship”, “educating fans”, “reducing operating costs”, and “enhancing our brand”.  The survey also reveals that among GSA members, sustainability efforts are somewhat or more important to 78% of their fan base and has become increasingly important over the last five years. So why are they doing this? For us, the fans!

Now for the “now what?”.  Everything the movement has accomplished really is impressive.  But most of the measurable achievements have been operational while the statistic used to drive the movement is fan-based—after all, 13% of Americans follow science, 70% follow sport. Which means that all of the carbon, water, and waste savings are simply a means to the much more important goal of gaining more attention.

The sports platform is meant to influence, not just demonstrate. Teams, venues, leagues, and events have sought authenticity by implementing their own initiatives, which is admirable. But now that many are walking the walk, it’s time for GSA members to further capitalize on their sustainability investments by talking the talk.

Since getting involved in this space in 2011, the thing I look forward to most at the Summit each year is hearing about the headway teams are making in sustainability. But now you’re thinking: “Wait, shouldn’t she already be aware of those things if she’s active in the movement?” And “Does that mean I have to go to this Summit if I want to know what my team is doing?” Both great questions and astute observations, well done. 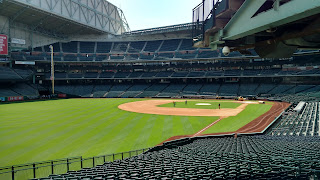 As the premier leaders in sustainability, the Summit program included an entire “MLB Sustainability Spotlight” panel. When asked what the one thing his organization could do better in green sports is, panel member Reid Ryan and president of business operations for the Houston Astros said, “Telling our story”.  During his final President’s address, Allen Hershkowitz said, “You’d be hard pressed to identify how much good environmental work is going on in the sports sector…outreach to fans about environmental issues by leagues and teams is underdeveloped.”

Opponents to environmental messaging say fans just want to hear about wins and it’s better for them to see the sustainable things teams are doing rather than telling them about it. While this mentality isn’t necessarily flawed, how exactly will fans see what’s happening? Save for the detail-oriented lighting professional, who is going to see and know the story behind the new lighting system that is using at least 25% less energy?  Better yet, who’s going to make the connection that this is a demonstration of sustainability benefits and stewardship that can and should be adopted outside of the venue?

Isn’t telling and influencing a widespread cultural shift the reason that we’re leveraging the influence of sport platforms in the first place? Yes, sports have the attention of 70% of American adults, but what significance does that have in sustainability if you aren’t communicating with and engaging those fans?

While the need for increased communication is recognized by leaders in the space, fan engagement is still in its infancy. That’s because executing in a meaningful, effective way that is also beneficial to the core business – winning – is not a plug-and-play operation.

For those that are ready talk the talk and truly leverage the power of sport to increase sustainability in communities, there are options for getting started.  First, if you’re not yet convinced about the power and need for better improved fan engagement methods, check out green sports guru Dave Newport’s post here.

Next, figure out where you’re at in the process.  Although I’d argue that every member should be ready to go all in, my business education tells me otherwise.  For those that are concerned about upsetting fans, sponsors, players, donors, etc.; a materiality assessment or stakeholder engagement can help an organization determine where to best allocate sustainability resources.  For those that are ready to take the lead on leveraging the true power of sport, you’ll need to develop a communications strategy. This will help take the guesswork and haphazardness out of fan engagement while significantly increasing awareness of sustainability initiatives – both their success and reasons behind implementation.

When sustainability becomes a visible part of sport, we all win.  And who doesn’t like to win?